When I was in high school I took a journalism class. It was a great class for a writer to take, and I learned a great deal. We were schooled in the history of journalism, on how “yellow journalism” made newspapers no more than entertainment, and how it took years for solid institutions like the Pulitzer papers to recover from the hit they took on their credibility. We were told that newspapers report the facts, and when possible, report the facts on both sides. That’s right, one sides facts, and the “alternative facts” from the other side of the controversy. We were taught that an “angle” on a story was the point of view, and that the slant of the story was the thematic message. We were told that slant was a matter of degree, and that too much of a slant on news effectively made it editorializing.

Recently on Twitter I commented that fact checking was, as it was being done, no more than editorializing. The hue and cry from the leftists was deafening because to them it should be just fine if a newspaper printed their facts and call the alternative facts “lies.”

As a lawyer I am familiar with a process we have called “summary judgment.” Essentially summary judgment says that if we can agree on what the facts are, we can determine the winner of a controversy without need of a trial. In the context of a traffic accident, if all the witnesses agree that the eastbound light was red, and the northbound light was green, we know that the car entering the intersection from the eastbound lanes is at fault. But, I’m still waiting for that case.

In every trial I have ever seen, on the key issues of liability, one side says green, the other says red. When the facts are disputed then summary judgment can’t be used, and the case must go to trial. So we have facts, alternative facts, and we leave it to a jury to decide who is right and who is wrong. It’s amazing how often 12 people get it exactly right.

If the news media in this country would simply engage in that same level of reporting, the mainstream media wouldn’t be judged so harshly as the purveyors of fake news slanted to enhance Democratic talking points. But the fact is that the story the media tells is almost never what really happened.

Case in point: Scott Pelley from CBS tonight said that it was a “chaotic first week” for “Mr. Trump.” He then said that “Mr. Trump insulted the president of Mexico with a tweet.” At no time did he call him President Trump, and at no time did he backtrack and say what the supposed tweet that insulted the Mexican president was. Going back and looking at the tweets reveals these: 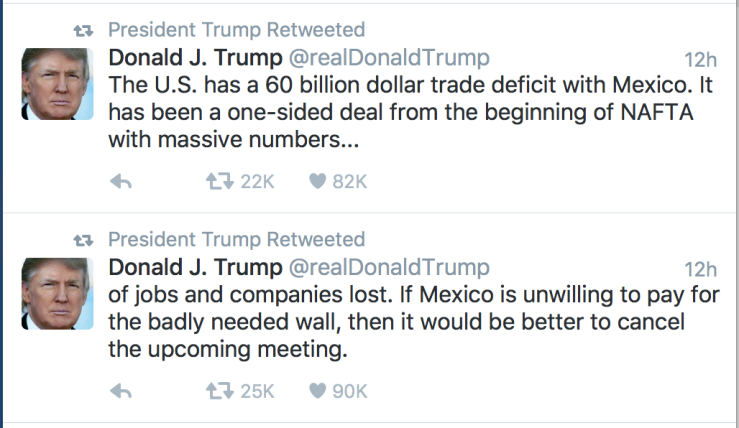 Then there is the issue of the “chaotic first week.” This, again, is editorializing. It is characterizing the first week as though no one was in control. And of course this was buttressed by the use of the words “Mr. Trump” instead of the correct title: President Trump.

At every turn CBS and other mainstream media are attempting to say, in words and in deeds, that President Trump is not, in fact, a legitimate president. They are editorializing and not reporting.  It’s wrong.  It’s frequent.  And the media just can’t help itself.  They hate the fact that he has made them irrelevant.

Had Mr. Pelley quoted the tweets and then said that the Mexican President had decided not to come to Washington, readers could have decided if that was because of some perceived insult, or because he knew he’d been bested and outclassed by President Trump. But Mr. Pelley instead decided to tell you, the viewer, what to think. By making this the lead of the newscast, and by emphasizing it so directly in his delivery, Mr. Pelley deliberately attempted to undermine the President of the United States.  If CBS had any ethical standards, he would be disciplined.  Don’t look for that to happen.

This is why the public does not trust the mainstream media any longer. It’s why people like Mr. Pelley are losing clout in Washington. It is precisely why millions votred for Mr. Trump based on rallies (where there was one-to-one communication) and on his tweets (where they could get his views straight and unvarnished).

It might be a good time to go back and refresh the media’s recollection of what yellow journalism did to the way the public looked at the news media in the 19th century, and start learning from their mistakes. Mr. Bannon’s sage advice to shut up and listen for a while is really pretty sound.