Today in Mr. Trump’s press conference, Jim Acosta from CNN whined miserably about his network being called the Fake News Network or as POTUS put it “Very Fake News.”  Around the country millions of heads were nodding in agreement with POTUS.

Get it Right, Dammit!

If the media has one job, that job should be getting it right. President Trump in his news conference today took the media to task for a number of things that some might say were “judgment calls” on the part of the media. But he didn’t need to look too far to see where the media went completely out of their minds: overturning the Social Security Gun Ban Regulation.  The media not only got it wrong, they got it deliberately wrong!

Here are a sampling of the headlines from various sources:

The Senate Voted Wednesday To Overturn A Rule Barring Gun Ownership For Some Who Have Been Deemed Mentally Impaired, (USA Today)

And if headlines were non-descriptive, the disinformation was featured prominently in the lead paragraph of the article:

The Senate voted to repeal an Obama administration regulation that prevents individuals with mental health conditions to be able to purchase firearms, 57 Yeas to 43 Nays. (CBS)

Even the television media piled on with the Today Show taking the most draconian approach through its breathless reporter Kasie Hunt:

KASIE HUNT: Matt, good morning. It’s one of the most divisive topics in America, and this morning, gun rights advocates are celebrating the rollback of an Obama-era regulation that would have added about 75,000 names to the background check database for gun sales. And with Republicans now in firm control of Congress, it could be just the beginning …

Only one national media outlet got it right:

The House On Thursday Struck Down An Obama-Era Regulation That Could Block Some Recipients Of Disability Benefits From Buying Guns. (The Hill)

Just a few observations: mental illness and the inability to manage a person’s finances are not the same thing. Do you recall, anytime in the last ten years, anywhere in the media, where an impaired senior citizen hosed down a convalescent home with gunfire? Nope!  Does requiring a conservator to manage you money suddenly make you Omar Mateen?  Nope.

Was “Sandy Hook” actually carried out by a gray-haired man who couldn’t manage his checkbook? That’s what the CT Mirror would have you believe.

And does the regulation itself reflect a concern with mental illness, or simply the Social Security Administration’s records reflecting payment to a conservator? A conservator, by the way, simply manages a ward’s money, they do not make life decisions on their behalf (that requires appointment of a guardian).

Here’s how conservatorships typically arise.  Grandma learns how to work the cable remote and finds herself on QVC spending money she doesn’t have on stuff she doesn’t need.  Her daughter Katie finds 27 CDs from K-tel in the mailbox, and gets concerned that Mom’s going to spend her money on music rather than her medication.  So she convinces her mom to let her manage her checkbook.  As a part of that, she gets the SSA to send her check to Katie as conservator.

Does that make Grandma crazy?  Does it make her mentally ill?  Does her failure to remember ordering the same CD collection 4 times mean she’s violent?  Does it in fact have anything to say about her mental competence?  No.

Here is the ACLU’s take on the issue:

the SSA [Social Security Administration] promulgated a final rule that would require the names of all Social Security Disability Insurance (SSDI) and Supplemental Security Income (SSI) benefit recipients – who, because of a mental impairment, use a representative payee to help manage their benefits – be submitted to the National Instant Criminal Background Check System (NICS), which is used during gun purchases.

We oppose this rule because it advances and reinforces the harmful stereotype that people with mental disabilities, a vast and diverse group of citizens, are violent. There is no data to support a connection between the need for a representative payee to manage one’s Social Security disability benefits and a propensity toward gun violence… the rule automatically conflates one disability-related characteristic, that is, difficulty managing money, with the inability to safely possess a firearm.

Every media outlet – with the notable exception of The Hill, not only got it wrong, they slanted the article to make it appear that the GOP was marching in lockstep with the NRA to repeal background checks altogether.  Many went so far as to suggest it was a repeal of the mental disease or defect language in the underlying statute.  It was not.  But if you use Google and check, you’ll see that language used time and again in the past few weeks.

This deliberately false narrative is simply a reflection of the media’s innate paranoia about guns. The idea that rational people who may think differently than they do can possess and use firearms scares the hell out of them.

But here’s the real question.  If neither the SSA or VA have had any instances in which older persons used firearms to harm others, and if there are no reported cases in the media of older folks going nuts with firearms, exactly what hole were these regulations mean to fill?  What problem did they solve?  The answer, of course, is none.

But that doesn’t stop the media from lying about the regulations and supporting the gun control (or more accurately: people control) regulations.  They support them because in their preening belief in their own moral superiority, they countenance a lie because they believe it tells a bigger truth.  It is sheer arrogance that allows this kind of cognitive dissonance.  So the next time Jim Acosta gets up at a press conference and whines about being called “fake news” show him this, 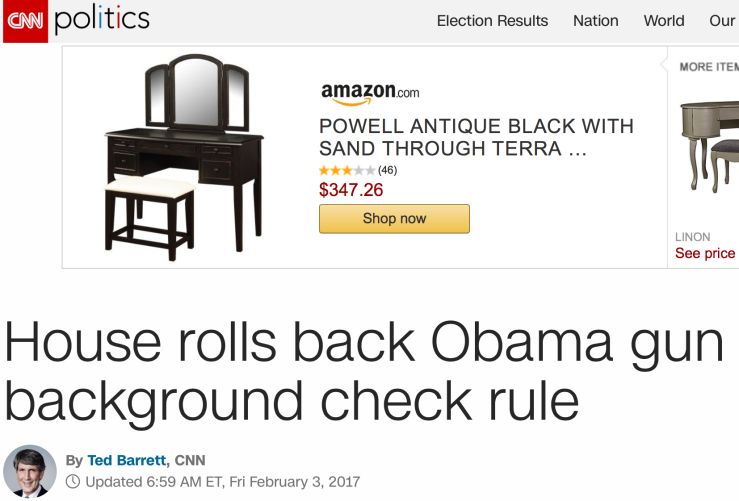 and wait for his apology. You’ll be waiting till Hell freezes over.