Some things we have learned this week from the Swamp in DC.

First, never trust the New York Times as the “first draft of history” unless you want to flunk your history test. Nearly everything it has published on the Trump-Russia investigation has been comically, pointedly, and inarguably wrong. So, after this abysmal performance in journalistic integrity, they immediately double down on their analysis of Comey’s testimony with this headline: 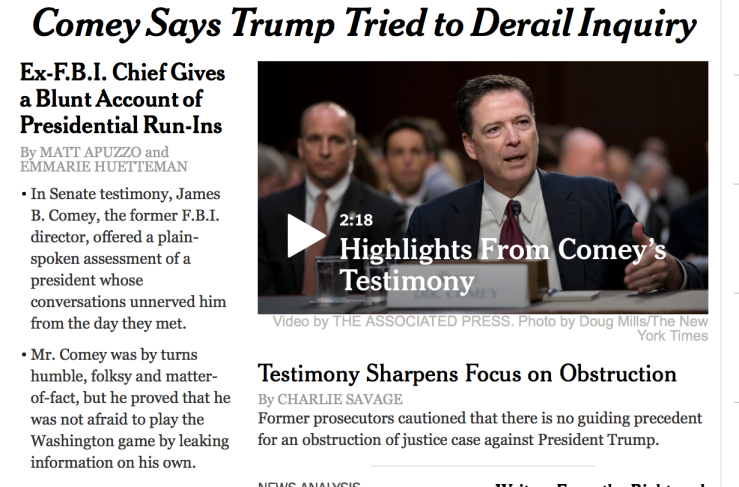 But, of course, that’s not at all what Comey said. His written testimony beforehand said exactly the opposite. His prepared testimony was:

I did not understand the President to be talking about the broader investigation into Russia or possible links to his campaign. I could be wrong, but I took him to be focusing on what had just happened with Flynn’s departure and the controversy around his account of his phone calls. Regardless, it was very concerning, given the FBI’s role as an independent investigative agency.

Here is what is truly amazing about nearly all of Comey’s testimony.   It’s all subjective.  Instead of testifying to actual words, or facts, or actions (which would be objective), Comey testified to his understanding, ability to be wrong, impressions, instincts, concerns, and his beliefs. Those things are all subjective, and are dependent on his belief system, ability to observe and correctly interpret meaning, and a bunch of other things. You have an excellent example of this in the quoted language above. Let’s look at it with those terms underlined

I did not understand the President to be talking about the broader investigation into Russia or possible links to his campaign. I could be wrong, but I took him to be focusing on what had just happened with Flynn’s departure and the controversy around his account of his phone calls. Regardless, it was very concerning, given the FBI’s role as an independent investigative agency.

So, let’s break this down, like we would in a deposition, and I’ll supply the questions that the lightweights on the Senate Panel either couldn’t, or wouldn’t supply.

So this was your “understanding”

But it could be wrong

The president could have been speaking about his hoped-for outcome.

You took no steps to verify that your understanding was correct.

You know how to ask direct leading questions

So you knew how to do it.

You just didn’t do that.

You could have said “President Trump, are you ordering me to drop this investigation?”

I could have said that.

But you did not.

Because you testified earlier that you were not strong enough.

And so my final questions would be.

So you admit you’re not strong.

I admitted that, yes.

And you also would admit that the FBI needs strong leadership.

And you have just testified to being such a huge pussy that you wouldn’t ask the President a question that bore directly on the conversation you were having?

And you wonder why he fired you?

Here are yet more examples of Comey’s ridiculous testimony given in writing.

My instincts told me that the one-on-one setting, and the pretense that this was our first discussion about my position, meant the dinner was, at least in part, an effort to have me ask for my job and create some sort of patronage relationship. That concerned me greatly, given the FBI’s traditionally independent status in the executive branch.

Comey was relying on his instincts. Were those the same instincts that told him he couldn’t prosecute Hillary, or the instincts that told him to follow Lynch’s orders and refer to it as a “matter?” Inquiring minds want to know.   His instincts are not admissible evidence in court. His divination of pretense is a legal conclusion that is sourced from his instincts, so again, not admissible.   His conclusion that this was an attempt to create a “patronage relationship” arises from the meaning he applied to the pretense he devined from the instincts and like everything else, it is inadmissible. It means nothing. He is not qualified to give an opinion on the truthfulness of another person (no one is).   So, again, this testimony is testimony that can be given zero weight by any neutral fact finder.  Most importantly, he could have clarified it, but he didn’t.

Near the end of our dinner, the President returned to the subject of my job, saying he was very glad I wanted to stay, adding that he had heard great things about me from Jim Mattis, Jeff Sessions, and many others.

So, we find that Comey now attempts to buttress his opinions by having Sessions and Mattis vouch for him. Sessions fired him, and I doubt Mattis would piss on him if he were on fire now. But it galls me because, again, none of this is admissible in Court. This is all hearsay, and irrelevant hearsay at that!

He then said, “I need loyalty.” I replied, “You will always get honesty from me.” He paused and then said, “That’s what I want, honest loyalty.”

Okay, lets stop right here. If you were confused, or even worried that someone might be trying to create a “patronage relationship” with you, now would be the time to put on your big boy pants stand up and say “Mr. President, are you asking for my personal loyalty to you, or my loyalty to my country, because I can’t give you a promise of personal loyalty if that conflicts with my duties as FBI Director.”

Why would you do that?

But here’s where you do it.

Here’s where you grab a pair of big brass ones and you speak truth to power, and if they don’t like it, you can resign. You always have that ability. But instead of this, what you do is…

I paused, and then said, “You will get that from me.” As I wrote in the memo I created immediately after the dinner, it is possible we understood the phrase “honest loyalty” differently, but I decided it wouldn’t be productive to push it further.

So, again, Mr. Comey is confused and unsure about the meaning of words but takes no steps whatsoever to clarify those words, he goes right back to the office and writes a memo and tells only his closest staff (and a Columbia University law professor) about it. Then he rat-holes the memo to be used as a “not-so-fast” card against the President.  And later asks his buddy to call the New York Times because his balls have shrunk from the size of bbs down to the size of grains of sand after getting fired.

But moreover, again, he decides it isn’t productive to push it further? Why? What makes it unproductive? Shouldn’t you know what the president is thinking? The fact is, he wanted the job, he wanted to have something to lord over POTUS, and he got exactly what he wanted by finessing a conversation and leaving it purposefully vague.

The term — honest loyalty — had helped end a very awkward conversation and my explanations had made clear what he should expect.

Comey, however, is not satisfied with merely explaining his own understandings, concerns, misgivings, and expectations. No, instead he testified to what POTUS understood because he said he made his explanation clear. But obviously that is not correct. He didn’t get honest loyalty, he got a guy who wrote a CYA memo and rat-holed it so he could once again script a narrative that made out a Republican to be a bad guy. This is shameful.

But let’s talk about what the Democrats have called obstruction, and what everyone else has realized is simply an expression of where the president hopes this would go.

He then said, “I hope you can see your way clear to letting this go, to letting Flynn go. He is a good guy. I hope you can let this go.” I replied only that “he is a good guy.” (In fact, I had a positive experience dealing with Mike Flynn when he was a colleague as Director of the Defense Intelligence Agency at the beginning of my term at FBI.) I did not say I would “let this go.”

In other words, the outcome I hope for is that you let it go. Yet again, Comey could have said “Are you ordering me to drop this investigation?”

But he didn’t. And he didn’t because, again, he wanted to fill that file full of these CYA memos so he could be ready for an ambassadorship under the next Democratic administration, or perhaps, an appointment to an appellate court. Yet, it amazes me that the President, who could have called a halt to the investigation of all of this right at that point (because the FBI is an executive branch agency and operates under his delegated authority), not only didn’t put the kibosh on the investigation, he told Comey:

The President went on to say that if there were some “satellite” associates of his who did something wrong, it would be good to find that out, but that he hadn’t done anything wrong and hoped I would find a way to get it out that we weren’t investigating him.

Note that the term “satellite” is in quotes in Comey’s testimony.  Even in putting in this exculpatory section, Comes has to engage in self-aggrandizement.

So here’s what we know at the end of the day:

All in all, this is a terrible day for the Constitution, the rule of law, and the leadership of the FBI, which will be forever tainted by the worst J. Edgar Hoover imitation ever. And remember, Hoover kept us safe in WWII, rounded up the gangsters from the 40s, and stopped communism in the 60s. Comey allowed Orlando and San Bernadino, let Hillary Clinton skate, and looked the other way when Bill Clinton and Loretta Lynch decided to have a pow wow in the middle of an active investigation (or matter, if you name is Lynch).  Hoover had the FBI Building named for him.

I can predict with great accuracy there will never be a federal building with Comey’s name on it.