How many times in the last 18 months have you heard something like this:

Polls show that X has a 20 point lead.

How many times has the election borne out that result? Yeah, exactly.

While the Weekly Standard had for weeks been suggesting that the Handel v. Ossoff race was a dead bang loser for Republicans, a sounding of the death knell for Republicans generally, and a personal rebuke to President Trump, in the end, it didn’t work out that way.  Much to the discomfort of the swamp creatures, citizens actually like their leader, and his policies.

But that does not answer the question of why the polls are wrong.  Why? Because polls are informational propaganda that can be disguised as some sort of objective work.  The media trumpets them as a measurement, at a point in time, of the status of the political race.  But polls are not such a thing. Either through skewed polling questions, or intellectually-challenged analysis, polls are conducted not to reveal the status of a race, but to change it. A look at gun polling discloses in part how this game is played.

Consider, for instance, the old “rhetorical question.” It has been used through the centuries not to get information, but to communicate the asking person’s intent. So when the addicted smoker prepares to light up under the No Smoking sign, and someone asks “Do you want me to kick your ass,” the question isn’t really about the relative merits of ass-kicking. It is designed to signal, to the offending party, that whatever action they are about to take, they should reconsider.

Should criminals be able to use the gun-show loophole to buy any gun they wish?

But ask the question in a different way:

Should private sales of firearms between lawful owners be subject to background check requirements?

The answer, again, is generally “No.” This is because people realize that when criminals acquire firearms it is generally by burglary or sales between criminals.   Everyone recognizes that Cletus doesn’t walk into the gun store and say “I’m fixing to rob the grocery store and I need to know whether a Glock 19 or a Kimber Revolver is a better choice.”  This because, while criminals are stupid, they are not that stupid. So how you ask the question matters.

Let’s return to general polling for candidates. It’s pretty difficult to make a question like “are you voting for A or B in this election” into something that’s negative. Push pollers do this, from time to time, by telling the voter something they supposedly might not know, and asking them if this affects their vote:

Do you believe that President Trump’s plan to throw migrant babies in the street and crush them under the treads of battle tanks reflects who we are today, and if so, are you inclined to vote for A because he wants to throw migrant mothers under the tanks too?

But generally speaking the question is straightforward in electoral polling, it’s just the analysis of the results that makes you scratch your head.

If you were to poll nothing but Republicans you would likely find strong support for the Republican candidate, and ditto for the Democrats. But there are no districts made up entirely of Democrats or Republicans. There is always a mix. So accurate polling looks at the mix of Republicans, Democrats and Independents, and factors that in to the polling. The first question is usually “are you planning to vote,” followed closely by “who are you voting for.” Then, after that messy topic is finished, pollsters ask demographic questions like age, sex, race, level of education, and party affliation.  They do this to slot the results into categories that are then manipulated to get the “result” of the poll.

Now, let’s suppose that the makeup of the district is 40% Democrat, 45% Republican, and 15% Independents. There are 10% of the voters who are over 70, and hence, not really likely to vote. In weighting the poll (generalizing the results and reporting it as a percentage for each candidate), a proper representation would take into account these factors. In this analysis candidate A leads by 5 points.

But, if you want to skew the poll results, you simply go with 40% Republicans, 45% Democrats, and you select Independents who are 30 or younger. The result is that candidate B now leads by 7 points. Make it a 50/50 mix of Republicans and Democrats, and that lead is 8 points. So the pollster, depending on who is paying, simply manipulates the poll results to show us what they want us to see.

But why would they do that? I know, I can hear you asking that question even now.

They do that because if they can depress the Republican voter turnout by telling voters that their vote won’t matter, it becomes easier to pick up the kids early from daycare and skip a run by the voting booth. Of course, it might easily have the same effect of suppressing Democrat turnout, but given the use of buses, “walking around money” and a dozen or so other “organizing tactics” Democrats always seem to get their voters (even the dead ones) to the polls.

Nowhere was this full court press with polling more evident than the recent $50,000,000 election in Georgia. Take a look at these headlines from the Weekly Standard 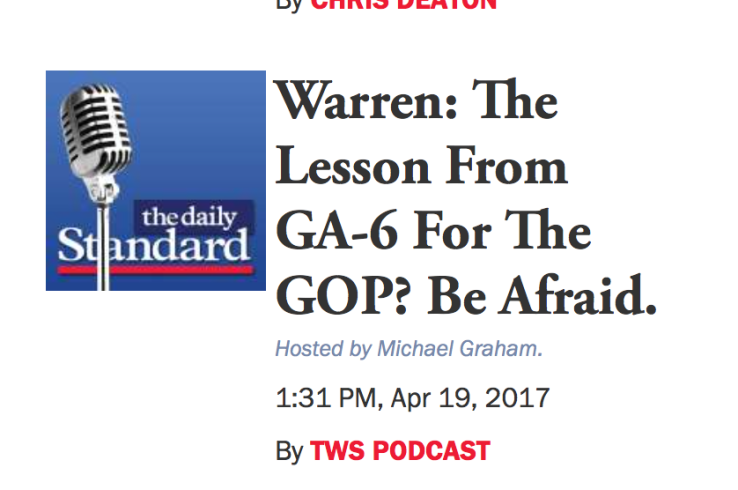 And these tweets from Pseudo-Conservative Bill Kristol:

The bottom line is that those who think they own the swamp in Washington are singing the anthem of defeat, at least in part so that they can get their buddies back into power in DC and stop these upstart citizens from taking back their government.

Today, that number includes Karen Handel.  Thank you, Karen, for working hard and getting the job done!

So, Weekly Standard, Bill Kristol, and all you other purported conservatives and alleged Republicans: I want to see you admit you were wrong, not mock those who succeed or worse, give advice to Democrats: