You are Being Deceived

As a lawyer, I see this kind of negotiation six or seven times a year with cases.  The Defendant knows or suspects he will lose at trial, and doesn’t want to pay the $350,000 that the Plaintiff is demanding.  So he pokes as many holes in the case as possible and goes to mediation crowing about the plaintiff (a 65 year old grandmother) being “a lying snake.”  The plaintiff knows that even with the best jury they could lose, and that there is little likelihood that they will get $350K.  So the start exchanging offers and responses and the case settles for $200,000.  Both sides buy their peace.

In the legislative example, both sides try to build coalitions and the final bill comes out with a 2% tax increase and budget cuts in other areas.  If we look at these situations graphically what we have is tension between two competing goals (infrastructure improvement and fiscal responsibility) and the tension is resolved through “compromise.” 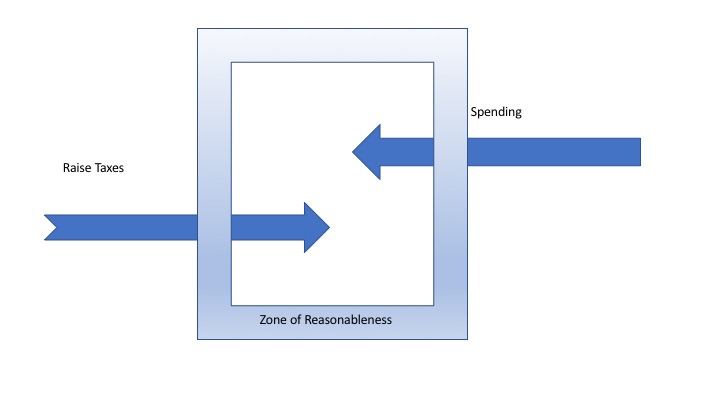 That’s because both positions are reasonable and supportable, and neither position violates the Constitution or any higher laws.  Compromise is not only possible here, it’s a great way to make sure that the greatest good gets done for the greatest number.  But it also assumes that everyone on both sides is acting in good faith, without a hidden agenda.  In the gun debate, that is not the case.

There is a popular metaphor about the frog in the water.  If you put the frog in a pot of boiling water it jumps out.  If you put it in room temperature water and heat it slowly, the frog boils to death eventually.  For the moment, accept the metaphor’s basis (even though there is no scientific basis for the metaphor: the frog jumps out).  The metaphor illustrates that incremental changes over time produce the same end result as sudden changes implemented immediately, just with less public outcry.  Except, of course, for the canaries in the coal mines: the parties actually aware of the hidden agendas.

This is the problem with the gun control debate.  The public assumes that there is a valid argument for limiting ownership of certain types of weapons, and that same public likely has never read the Second Amendment.  So, when they hear “we need to ban assault weapons,” there are a series of thoughts that go through their heads:

What the public does not do, however, is actually think critically about what they’re being told. Common sporting rifles like the AR-15 and the AK-47 are not assault weapons.  Assault weapons are weapons capable of automatic fire: bullets keep firing until you release the trigger.  Sporting rifles fire one bullet per trigger pull.  Unfortunately, and in spite of nearly every gun advocate screaming about it, the media keeps using the term “automatic” instead of semi-automatic. The distinction is critical.  An “automatic weapon” is automatic because both the loading and firing of the weapon are automated. A “semi-automatic” automates only the loading of the next round. The lazy media use the word “automatic” relentlessly either out of stupidity or malevolence: take your pick.

If the public thought critically they might wonder when when they go into the sporting goods store there is not a sign that advertises “assault weapons.”  That’s because to get one, you need a tax stamp from the ATF, and you have to have some reason for a weapon that is effectively a weapon of war. But they see a scary black rifle and they automatically think “the only purpose that has is to kill people.”

And, of course, that’s wrong.  They’re fun to shoot, cheaper to shoot than other rifles, and useful in hog hunting, deer hunting, and varmint hunting.  Equipped with an EOTech sight, they are an excellent tool for getting rid of everything from snakes to coyotes.  Yet, the media tries very hard not to tell anyone that, because that goes against the “scary assault weapon” narrative.  The fact that the weapon is underpowered when considered next to a .308, 30-30, or even a 45-70, matters not to the people who are paid to deceive.

The same people are paid to offer up this “compromise” narrative.  The narrative goes something like this:

And the reason is clear. The Second Amendment is hard-wired into the Constitution because our forefathers saw the need to arm citizens against the power of government.  There is absolutely no competing, reasonable principle on the other side.  All competing principles are in fact antagonistic to the Constitution. This can be represented graphically as follows: 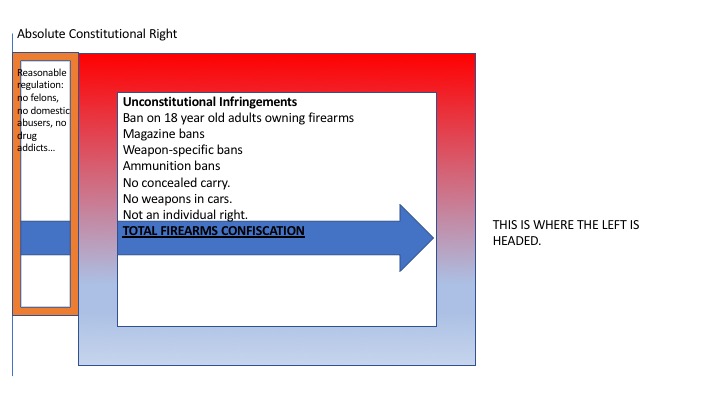 Our forefathers were brilliant and wise.  They knew that power corrupted, and that absolute power corrupted absolutely.  So they armed every citizen.  Over the years, we’ve lost sight of the fact that guns help ensure that no one person, or group of persons, can thwart the will of the people.  Missouri, in fact, has as its motto “Let the will of the people be the supreme law of the land.”  A great motto, and an appropriate sentiment in this discussion.

Here is the problem with the left’s “compromise” narrative.  It has a ratcheting effect, sort of like a boa constrictor.  Every time we breathe out, they tighten up.

Background checks are needed, we have to have them, compromise with us!

We did.  And what did it get us.  It got us a system that doesn’t work, and doesn’t stop people like Nicholas Cruz.  So, what’s the Left’s response:

Uh, no.  You haven’t shown us that any of these shootings were done with weapons acquired outside the current system.  And we want national conceal carry reciprocity.

YOU WON’T COMPROMISE WITH US! YOU HAVE BLOOD ON YOUR HANDS.  YOU’RE EVIL!!

See the deception?  They only want to compromise when we give up something.

In essence, we give up our rights, and all they do is take more rights.  Like most every other gun owner other than the ones deceived by the leftist rhetoric, I am tired of having my rights stripped.  I am tired of seeing rights taken with no analysis of whether the rights-depriving measures actually work.  I am tired of when those measures do not work, and do not stop the carnage, that the next “solution” is more draconian regulation aimed not at the evildoer, but the common citizen.  It’s almost like the left recognizes that criminals don’t obey the law, and that their goal is not “reasonable regulation” but rather, outright confiscation.

To the left, it is reasonable to ban AR-15s because they look scary, not because they are the most powerful rifle.  To the left, it is reasonable to require all gun sales, even between father and son, uncle and nephew, etc., to be background checked.  But the real goal of these “universal background checks” is a national firearms registry.  The left knows that criminals don’t go through the system, they steal them, or buy them from other criminals.  And it’s worth noting that when New York passed its draconian law outlawing weapons with more than 5 rounds in the magazine, New York used its gun registration lists to go after the owners and confiscate the weapons.

No more.  We have our backs to the wall, and you can’t push us any further.  Do not fall for the “we need to compromise” deception. It will not stop with that compromise.  It will not stop until you are disarmed, and no longer a citizen, but a subject.